A good moment in the New Testament to keep in mind, is one where Jesus basically says, if two or three are gathered in His name-whatever they ask for will be given to them. I love that passage because it offers so much confidence for all our prayer lives. But then, it can lower our confidence too, when we do just that and, in our perception, we do not get our prayers answered. What can we do then? We could fall back on that older teaching that says if God doesn’t give us what we ask for in prayer, He will give something better. I was brought up with that teaching myself. Of course, I was also brought up to believe that when we pray, it should always be done with His Will in mind. Christ prays that way just before He is arrested and begins His Passion. Remember? It went along the lines of, “Father – if this cup could be removed from me. But not my Will, but your Will be done.” These additional teachings can console and comfort any of us. Still, some people need more. They end up praying less and less, as they wonder why God just is not answering their prayer. Something else seemingly is needed to really enhance our perspective here.

And I have it! What is needed can be found just before the passage mentioned above. Specifically, just before Christs statement that two or three believing people praying together will have their prayers answered, He offers teaching on forgiving people – which also includes receiving forgiveness. It must be that way, i.e., receiving forgiveness ourselves, because Christ says that we should love others as we love ourselves. I find it fascinating that these two teachings are given so close to each other. I can only conclude that they are best understood
if applied in the order given. In other words, if I want any prayer answered, my first step is to forgive anyone who has offended me. I should also ask for forgiveness from anyone I have offended. Now, I get together with one or two other people, at least, who have gone through a similar process of forgiving others and asking for forgiveness. NOW we three who have gone through this process get together for prayer. All that is left is for us to observe how powerful our prayer becomes. The Scriptures indicate that a qualitatively difference will be present, and on multiple levels.

Consider the results of such prayer. I will certainly have a more powerful experience of God. My experience of God will be so powerful, in fact, that all I want is for God’s Will to be done. At this point I won’t even be bothered by what appears to be unanswered prayer, as I would be before I allowed forgiveness in my life as Jesus teaches. I am so immersed in forgiveness,
remember, that I am now really into God’s Will being done anyway. Forgiveness allows my consciousness to really expand. My awareness is so much greater. The last benefit is that my original prayer intention may well be answered as presented. The prayers of my prayer partners included!!!

The enrichment of my attitudinal stance before God is what matters here. And the reason why it becomes so enhanced is simply because of our willingness to follow the teachings of the Lord – and immerse ourselves in forgiveness.

How we stand before our God is a common enough theme in Scripture. Because it is so common, we are then led to recognize that this is very important. So, we might take a moment to reflect on how we ourselves stand before our God, acknowledging it and owning it, and then compare our self-understanding with that of Scripture, and for that matter with the Saints whose very lives mirror Scripture so masterfully.

We can begin with the Publican and the Pharisee. In this story the Pharisee stands before God, praising Him for giving him the Grace to not be like other men, such as the Publican. The Publican, on the other hand, beats his breast simply saying “O God, have mercy on me a sinner.” Here we are offered a distinct contrast of two different ways of being. I am not going to say two personalities though, because all personalities are called to be in dialogue with Scripture, and as a result of this dialogue, to change.

Consider! Blessed John Henry Cardinal Newman of England was famous for saying, “To live is to change, and to be perfect is to have changed often.” He would also say “True Christendom is shown…in obedience, and not through a state of consciousness.” These are two very important points to reflect upon. Ernest Kurtz and Katherine Ketcham, in their book “The Spirituality of Imperfection” draw on the wisdom of the Desert Fathers when they point out that “Obedience-to obey- means simply to ‘listen thoroughly.’” (Kurtz, p.95) How else can conversion happen, considering that the original meaning of sin is to “miss the mark,” and the original meaning of conversion is to have a “change of mind.” How can I have a change of mind if I do not listen carefully to what God wants, considering that His perspective is Supreme. If I do not listen carefully, I find that I will often miss the mark, or, we might say-sin.

Returning to Blessed Newman, he would say: “Therefore I will trust Him. Whatever, wherever I am, I can never be thrown away. If I am in sickness, my sickness may serve Him. In perplexity, my perplexity may serve Him. If I am in sorrow, my sorrow may serve Him. My sickness or perplexity or sorrow may be necessary causes of some great end which is quite beyond us. He does nothing in vain. He may prolong my life, He may shorten it. He knows He is about. He may take away my friends, He may throw me among strangers, He may make me feel desolate, make my spirits sink, hide the future from me.

Still, He knows what He is about. Therefore, I will trust Him.” (From “A Great Teacher of the Church, Blessed John Henry Cardinal Newman, His life and legacy, in celebration of his beatification by Pope Benedict XVI”) To be sure, the above quote shows us a person who listened carefully to what God wanted and is thereby to be considered by us in these days to have been obedient. He could listen carefully because he began with the obvious conviction that God knows better how he should live than he did. The Publican had the same spiritual mindset. And as a result of his conviction, he would not compare himself with other people; nor would he feel superior to other people. Rather he saw himself as someone standing before a most Merciful God, and recognizing that he falls considerably short before the Awesomeness of God’s Love, could only ask for Mercy for himself. Both men saw Reality as it is, and not as they want it to be. Kurtz and Ketcham would say that “Willingness involves the acceptance that one is not in absolute control, thus opening up the possibility of being changed- being open to what change is possible even if one is not in control.” (Kurtz, 122) So, when you first evaluated yourself and how you stood before your God, were these the insights that you, yourself, had? Have a blessed week! 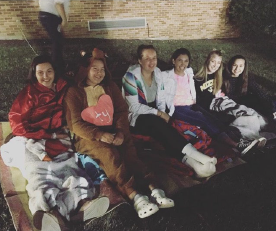 Our youth group at OLP is growing! Over the past three years the youth group has facilitated the Vacation Bible School program, collected books, school supplies, toiletries, and diapers, for children and families in need in our area, and have attended Adoration and retreats. They have participated in the PADS program at Hopes Front Door and assisted with a back-to-school supply drive. Along with service, the youth group loves to have fun. They have gone to Laser Tag, had several water balloon battles, played Ghost in the Graveyard, they have enjoyed many movie nights and even played the human version of Hungry, Hungry, Hippos!

In the coming year the youth group will continue with service and fun. They plan to hold a Bake Sale to raise money for victims of the recent hurricanes, give gifts to a family in need for Christmas, as well as volunteering with children who have special needs. They are also going to have a Halloween party with a “Mad Scientist” theme, Thanksgiving Day Potluck meal, a PJ’s and Hot Cocoa party, and an Anti-Valentine’s Day party, they have dubbed “Halloween II”. If you are interested in joining or just looking for more information, check the information board in the back of the church, visit the website at olopdarien.org, or follow them on Instagram at olp.youth.ministry.