I graduated with a bachelor’s degree in Pharmacy from the University of Illinois in 1971. I married my wife, Jan, in 1970, have four children and (currently) four grandchildren. I worked as a store manager and retired after 35 years for the Walgreens Company. After retirement I started formation and was ordained a Permanent Deacon in August 2007.

Currently, I am responsible for our parish’s RCIA program, Bereavement Ministry and Marriage Preparation. I am also the liaison for all parish ministries.

I graduated from Northwestern University in 1978 with a Bachelor’s degree in Political Science and have been a State Farm Insurance Agent since 1980. My wife Debi and I were married at Our Lady of Peace in 1979. We have 7 children, all of whom attended OLP School, and 6 grandchildren.

During the past 25+ years, Debi and I have been active in the Cursillo movement in the Joliet Diocese and remain active participants today. Currently, I am responsible for Pastoral Ministers of Care, Adult formation Classes and the Christ Renews His Parish movement here at Our Lady of Peace. 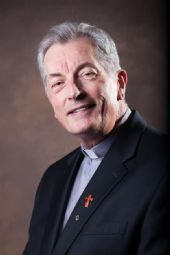 I graduated with a Bachelor’s Degree in Metallurgical Engineering in 1972 from the University of Illinois – Chicago Circle Campus. I am currently a Sales Engineer for an equipment company headquartered in Riverside, CA. My wife, Mary, and I have 2 children and 4 grandchildren. We recently moved back to the Chicago area after having lived in St. Louis for the past 23 years.

I was ordained to the diaconate in June of 2010 by Archbishop Robert Carlson in St. Louis. My ministries have included pastoral care of the sick and elderly, RCIA, adult faith formation and the Knights of Columbus. I look forward to ministering to the faithful at Our Lady of Peace Parish.